Heimdallr is a large, rocky planet orbiting the millisecond pulsar Lich (PSR B1257+12). It has a bizarre physical composition with a core of the radioactive thorium mineral Steacyite and a 300km thick crust of Barium Fluoride. Trace amounts of surface water are present but are quickly converted to atmospheric steam due to radiated heat from the planet’s core. The planet has a density of approximately 3.02 g/cm³, markedly less than earth's density of 5.51 g/cm³. However, don't be fooled into thinking that Heimdallr is a lightweight; Heimdallr is four times the radius of the earth and thirty-five times more massive. This means that the gravitational acceleration on the surface of the planet can be as great as 21.5 m/s², a crushing amount of gravitation. On Heimdallr, objects would weigh more than twice as much as they would weigh on earth.

This crushing amount of gravitation, however, is offset by the unusually high rotational velocity at the equator. A day on Heimdallr is a mere one hundred and fifteen minutes, just under two hours. These incredibly short days, coupled with Heimdallr’s large equatorial circumference means that, at the equator, objects would be travelling over fifty times faster than they do at earth’s equator. As it happens, objects on or near the equator are travelling at Heimdallr’s escape velocity and are therefore perpetually in orbit. This means that while objects would weigh twice as much as earth near the poles, near the equator everything would appear to be weightless, suspended in midair. Barium Fluoride is a scintillator — a material that converts ionizing radiation into light. The Barium Fluoride crust of Heimdallr glows a soft violet, fueled by Thorium decay within the planet’s core. Furthermore, due to rotational stresses and the zero-g zone near the equator, it is commonplace for large chunks of the crust to break off from the planet and orbit directly above the planet’s surface This, coupled with the fact that Barium Fluoride is slightly soluble in water vapor would mean that, encircling Heimdallr’s equator would be a ring of levitating purple crystals and a soft, glowing, purple mist.

This gives Heimdallr a sort of serene beauty near the equator. Move more than ±5° latitude, however, and the planet becomes incredibly violent. The rapid rotation that gives Heimdallr its halo is also what leads to an out of control variation of the coriolis effect. This would result is massive hurricanes and cyclones. If hurricane Katrina, a monstrous hurricane with 175 mph winds had occurred on Heimdallr, The increased Coriolis parameter would have led to a 12.6x increase in angular momentum and would have raised wind speeds from 175 mph, to 2200 mph. Hurricanes on Heimdallr have the potential for supersonic wind speeds travelling at nearly three times the speed of sound.

In addition to the hellish gales on Heimdallr, the planet is baked in radiation. Lich is constantly bathing the planet in solar radiation and is additionally blasting the planet with a massive amounts of radio energy every 6 milliseconds. Heimdallr itself is a massive source of radiation. The alpha and beta radiation from the core penetrate the crust and bake the surface. In addition, Barium Fluoride emits the majority of its radiation in the UV spectrum, another high-energy radiation that is extremely harmful to complex life.

Heimdallr, therefore, is an extremely diverse planet divided into several latitudinal regions. The Equatorial Zone, spanning from -5° to 5°, would exist in a state of suspension. A luminescent purple mist accented with shards of levitating, glowing, purple crystal would form a halo of serene beauty. The Equatorial Zone would be 4500 km wide. Granted one had proper environmental protection gear, this region would be both habitable and beautiful. The Death Zone would extend from -5° to -30° and 5° to 30°. This region would be wracked with near supersonic storms and uninhabitable even if one could endure the radiation and heat. Do not attempt to traverse the Death Zone. Next is the Light Zone ranging from -30° to -40° and 30° to 40°. This zone exhibits noticeably lighter gravity than earth, anywhere from 5.5 m/s to 8.5 m/s. The Earth Zone stretches from -40° to -45° and 40° to 45°. Here gravity is very earth-like and earth physics would be mostly indistinguishable. Beyond -45° and 45° is the Heavy zone. Everything in this zone would seem noticeably heavier than on earth. 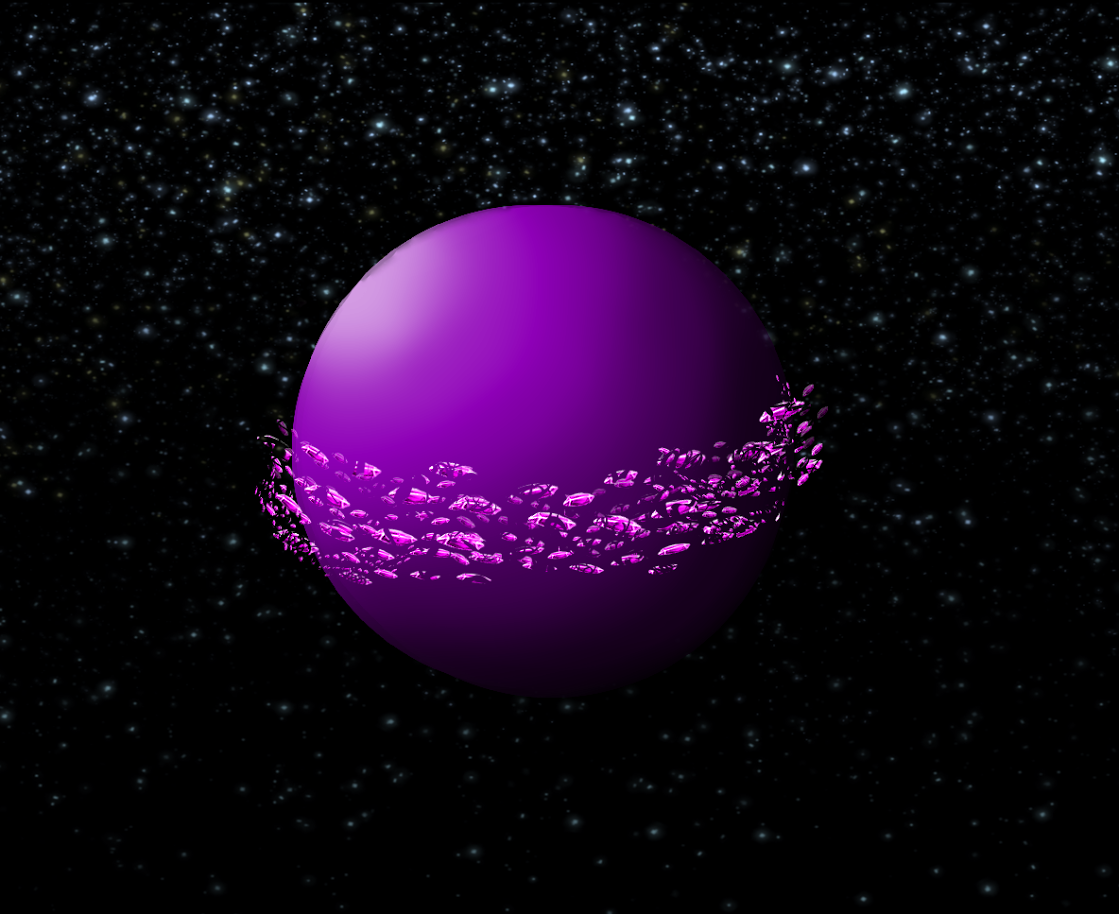